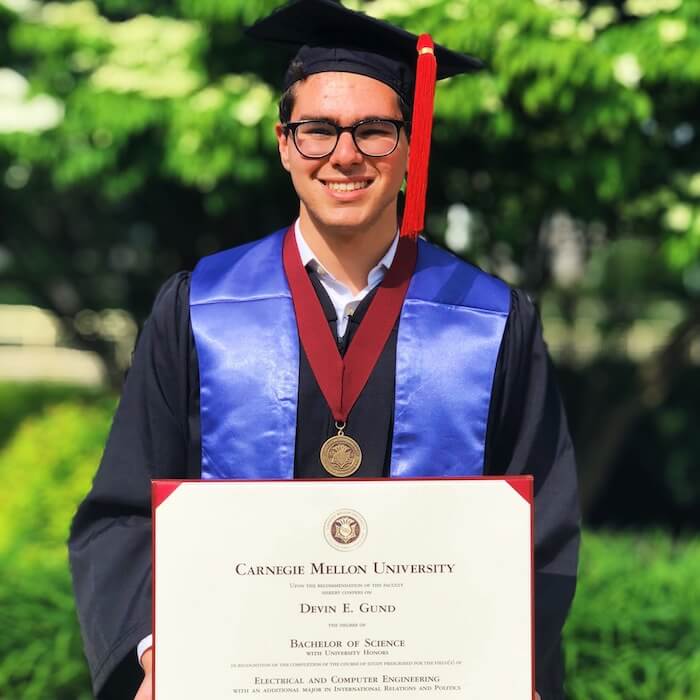 At Carnegie Mellon University I had many meaningful experiences that developed me as a leader and a strong problem-solver. I originally entered to study Electrical & Computer Engineering in one of the best programs worldwide, and courses like Embedded Real-Time Systems (18-349), Computer Architecture (18-447), Wireless Networking (18-452), and undergraduate research into nationwide wide-area network policy expanded my technical skills to span all levels of the hardware and software stack. I was able to put these skills to work on great projects, including an intuitive projected touchscreen, an intelligent computer personal assistant, and a fair ranked voting system for student government elections. This set me up for an amazing three summers interning at Apple.

Along the way, my passion for public policy and international problem-solving led me to double-major in International Relations and Politics, spending a semester in Washington D.C. and interning at the U.S. Securities and Exchange Commission. I excelled academically, graduating with University Honors and membership in Phi Beta Kappa (the only graduating engineer with that distinction).

Outside of academics, I found many opportunities to become a leader on campus, serving on the Student Senate as Vice President and Business Affairs Committee Chair and as a member of the Engineering Student Council. Additionally, I was a team lead for CMU's NASA Mars Ice Challenge team and joined the Astronomy Club.